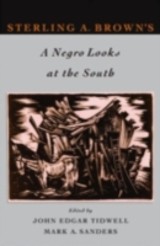 Sterling A. Brown's A Negro Looks at the South

Using oral history and the printed word, Sterling A. Brown set out during the Second World War to capture the response of African Americans, primarily living in the South, to America's involvement in the war and how it affected them. These responses, brought together in extended, non-fiction essays of many different types, illustrate the diversity of opinions in the Black South about the war and the war period in America. For nearly sixty years, the excerpts that were never published languished in Brown's manuscript collection at Howard University. Now, for the first time, all of the completed pieces of unpublished writings are combined with the few published sections into the book that Brown envisioned. The legacy Brown left us is not only a superb portrait of the way in which African Americans of the mid-century talked and lived; he also provided a methodology that oral and written historians will find extremely useful. This is clearly a document from another time, as its now outdated title reminds us, but it reveals a world that still informs our sense of ourselves as a nation. In fact, it is an unforgettable history, which Brown has cast in a bright, elucidating new light.